A history of great discovery

A former laboratory at pioneering women's college is re-imagined at Hampstead Manor. 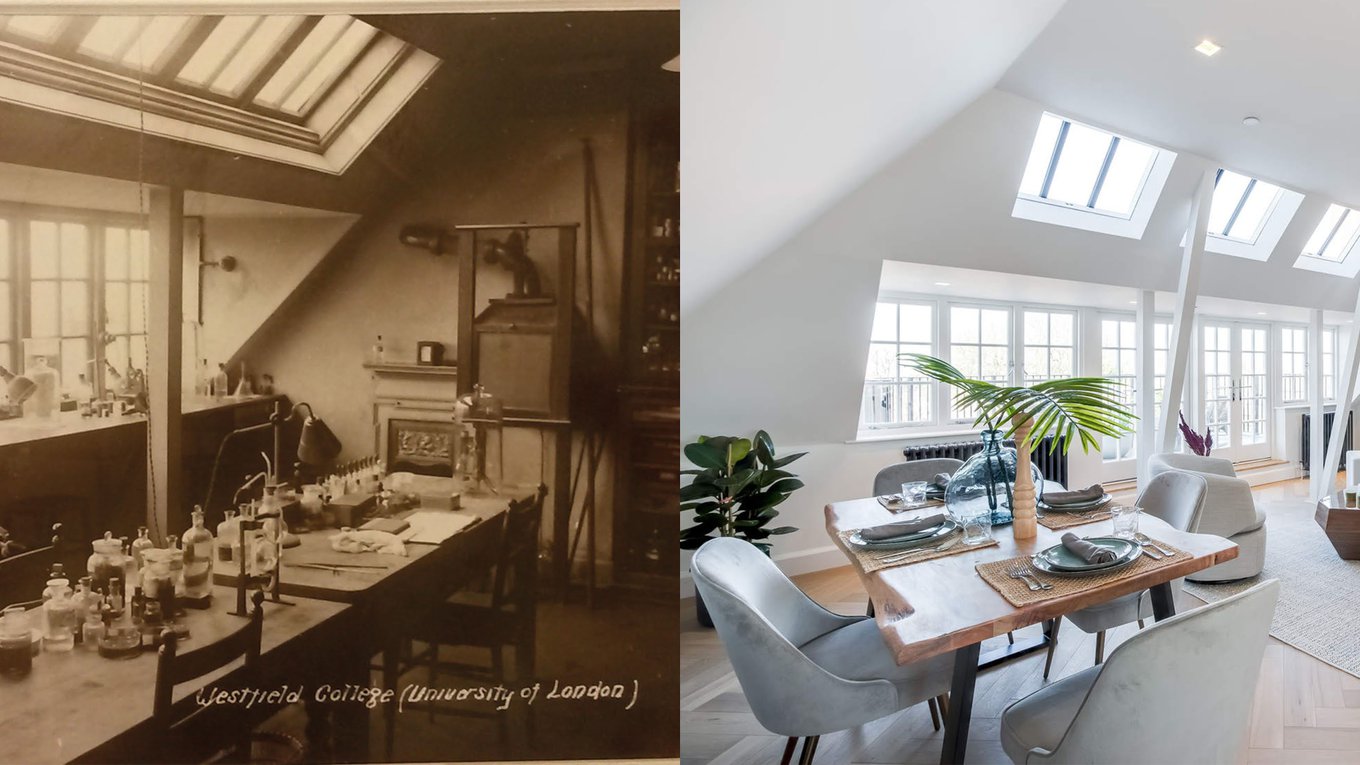 As a celebration of women’s education, which underpins the heritage of Hampstead Manor, this International Women’s Day, Mount Anvil opens a three-bedroom duplex show apartment that was once a science laboratory. The lynchpin of Westfield College – a former women’s college for botany, and the first of its kind to prepare women for university degrees – this apartment is one of 156 new homes located across 13 buildings at this historic development.

The new 1,223 sq. ft show apartment is located directly below the site’s clocktower within the period conversion of Maynard – an early 20th century building that comprises just sixteen one, two and three-bedroom apartments. Each home within this sensitively restored building retains original period features, including large bay windows and ceiling heights of up to 2.9m, which flood the interiors with natural light.

The living/dining area of this home harbours particular historical significance and was once used as a centre for scientific discovery during its former iteration of Westfield College, which was founded in 1882 and merged with Queen Mary College in 1989.

The legacies left by the female academics that once walked the halls at Hampstead Manor have been immortalised by Mount Anvil, as they propel the site into its next chapter. The Maynard building is named after Constance Louisa Maynard, the co-founder and first mistress of Westfield College, who was considered a radical of her time as she strived for a future and equality for women’s education.

Celebrating the scientific discoveries made by British women, another building is aptly named Rosalind Franklin. A Cambridge graduate, she went on to be a leading chemist and X-ray crystallographer, who made significant contributions to the understanding of molecular structures and DNA.

Inspired by the scientific heritage of the show apartment and its broader context, London-based interior design agency, Homewings, experimented with a concept that gave a fresh and contemporary feel whilst subtly nodding to its former incarnation as a nucleus of women’s innovation and academia.

Liza Lamar, Head of Design, Homewings, comments: “Drawing on the scientific and academic history of Hampstead Manor played a fundamental role in our design process. We wanted to establish a connection between the interiors and the pioneering nature of the building’s past.

“Albeit an historic building, the high ceiling heights and large windows bring a bright, contemporary feel to the space. To maintain this balance between the old and the new, we introduced soft furnishings throughout the show apartment that evoke its scientific heritage.

“With botany and nature both key motifs, we introduced Phillip Jeffries’ all-natural silk wallpaper to allow this concept of nature and authenticity to seamlessly run through. This theme continues in much of the furniture, with natural timber and marble bedside tables featured in the bedrooms. We also layered the communal spaces with lush greenery including fiddle leaf fig plants, to bring the outside in.

“The carefully selected artwork points directly to the scientific past of the building. Blueprints of a microscope and balance scales, that would have been used in the laboratory, feature in two of the three bedrooms. Meanwhile, botanical prints decorate the bathrooms and planetary inspired works dress the walls in the living space.”

The three-bedroom duplex show apartment at Maynard is priced at £2,250,000. Prices at Hampstead Manor start from £740,000 for a studio apartment.  For more information or to arrange a viewing, please contact the Mount Anvil team at: sales@hampsteadmanor.com or 020 3582 5461 or visit www.mountanvil.com/hampsteadmanor