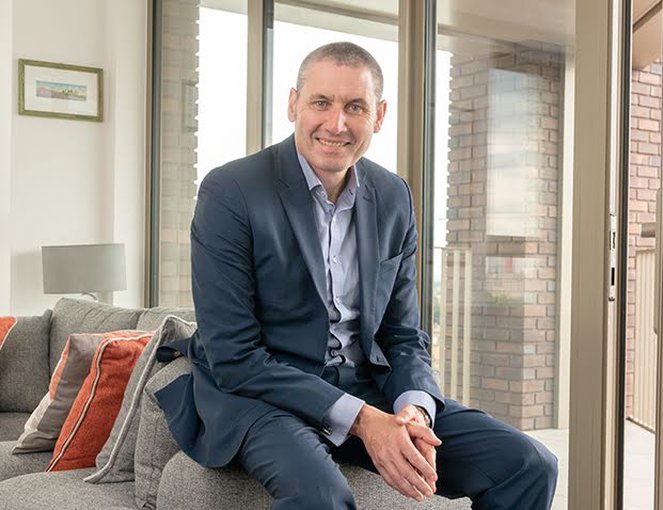 The 5:2 diet has long established itself as a way of eating – but Ronnie Taylor and his wife Elizabeth have made the concept a lifestyle, dividing their time between their hometown, Edinburgh, and their new property at Royal Docks West, part of Royal Eden Docks.

The couple first established their 5:2 lifestyle just over a decade ago, when work commitments meant they needed to spend two days a week in London.

Deciding to keep their main home in Edinburgh and secure a pied-à-terre in the capital, Ronnie and Elizabeth quickly realised this was a lifestyle that suited them. As Ronnie said when talking to the Telegraph recently about the couple’s lifestyle, “The buzz of networking with clients in the City in one place, then back to Scotland for a calmer time of family and golf. It’s really the best of both worlds.”

Ronnie and Elizabeth were drawn to the buzz and convenience of east London. When they started searching for somewhere new, the couple wanted to stay close to the area they loved – but with a period property back in Edinburgh, they wanted a low-maintenance, new-build home.

Ronnie says that they had “heard good things about the quality of Mount Anvil’s other schemes and wanted a home where we could lock the door, head back to Scotland, and not have to worry”.

The couple loved Royal Docks West from their first visit. “We were immediately blown away by just how much more we could get for our money”, Ronnie recalls. They went on to buy a two-bedroom apartment with a balcony on the seventh floor of Royal Docks West.

It’s easy to see why. In Edinburgh, Ronnie and Elizabeth are spoilt with views over Arthur’s Seat, Edinburgh Castle and the Pentland Hills beyond, so views were a priority for their new London home. Royal Docks West delivered. “When you enter our apartment, there are floor-to-ceiling windows that lead out onto a huge, east-facing balcony”, says Ronnie. “From there, we have a clear view of the sunrise, the Thames and the beautiful Victoria Dock. We couldn’t ask for more”.

Royal Docks West, along with Royal Eden Docks, our new scheme in the area, sits at the heart of the Royal Docks transformation story. This far-reaching regeneration project will see £8bn and 60,000 jobs pour into the area over the next 20 years, as well as the arrival of the Elizabeth line (Crossrail) at Custom House in 2020.

All of this means that Ronnie and Elizabeth’s apartment is forecast to prove a great investment in years to come.

For this couple though, the move has been more about finding a quality home with a waterside lifestyle that’s hard to beat in east London. “It’s busy enough to keep us entertained yet tucked away from the noise of central London”, Ronnie tells us. “When the marathon whizzed through in April, the atmosphere was electric. We sat on our balcony with a drink and just took it all in”.

Royal Docks West and Royal Eden Docks are thoughtfully designed developments, built around the needs of modern Londoners and their varied lifestyles. As Ronnie summarises, “Living in between not just two properties but two countries doesn’t come without its issues. But since moving to Royal Docks West it’s been a carefree joy!”

Interested in finding a home on the Royal Docks that works for your lifestyle? Check out Royal Eden Docks where the new homes feature 17 health & wellness amenities in a thriving location, making them an appealing investment opportunity.