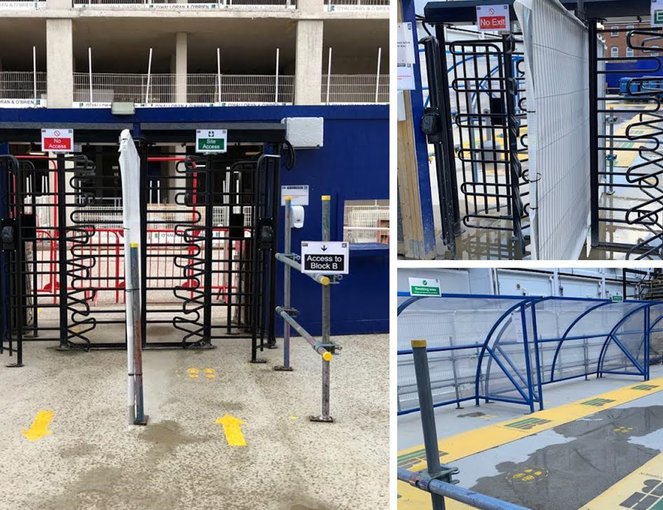 Designing a culture for quality #2: Wellbeing

In our second visit to the award-winning The Silk District site as part of a miniseries of interviews on how to build a culture that drives quality outcomes, Project Director Andy Hunt lifted the lid on what his team have been doing to support the wellbeing of people on site, and how that’s been driving results already.

Hello again Andy, thanks for having us back, we’re really pleased to be here again, even if it has been a little while longer than first planned.

It’s a pleasure – always great to talk about what we’re doing here in Whitechapel!

Could you tell us what has changed since our last visit?

Since you last visited, we downed tools for a while to keep our team safe. During this time, a handful of teammates who were able to get to site without using public transport and were happy to (we wouldn’t want anyone to feel unsafe), worked very hard to quickly learn from the Construction Leadership Council’s guidelines and adapt the site appropriately– this has allowed us to reopen in a safe and measured way.

We started by replacing all of the finger recognition entrances with key fobs and then placed a welfare attendant at these entrances - their role is to remind everyone to stay socially distant and check the thermal cameras for anyone with a temperature. We also added another welfare attendant who monitors the changing rooms, they make sure that only 15 people to use them at a time.

We’ve also created more offices and welfare facilities to ease the congestion that we would usually see at peak times and reduced capacity in our canteen with social distancing crowd barriers and floors markers throughout. This is supported by a rota so that everyone has a fair chance to take a full break without coming into contact with those outside of their immediate team.

We’ve been holding feedback meetings on Teams since we started returning and it has been very positive so far – I particularly liked this comment from one of our subcontractors “our employees immediately felt confident seeing the stringent controls not only planned but maintained during the working day.”

That’s really impressive. And while a lot has changed, it sounds like your site teams  happiness and wellbeing, something that you touched on just as we were wrapping up last time, is even more important than ever. Could you tell us a bit more about wellbeing at The Silk District?

The wellbeing of the guys and girls we’ve got working on site is absolutely central. Health is often the forgotten part of Health & Safety in construction, just because safety is such a priority on a building site.

In the past I’ve worked with developers – mentioning no names – where the Is were dotted and the Ts were crossed on the safety side, but their site teams are miserable, working in rubbish conditions and not looking after themselves. That’s a shortcut to poor mental and physical health.  It’s bad for people.  And, it doesn’t create quality work. People who are motivated, feel appreciated and take pride in what they’re doing build the kind of homes we want to build.  So cutting corners when it comes to wellbeing makes absolutely no sense to me.

I always think that at Mount Anvil, we may as well call it ‘Health, Safety and Wellbeing’. They’re all part of the same thing. We care about people just as much as we care for them. 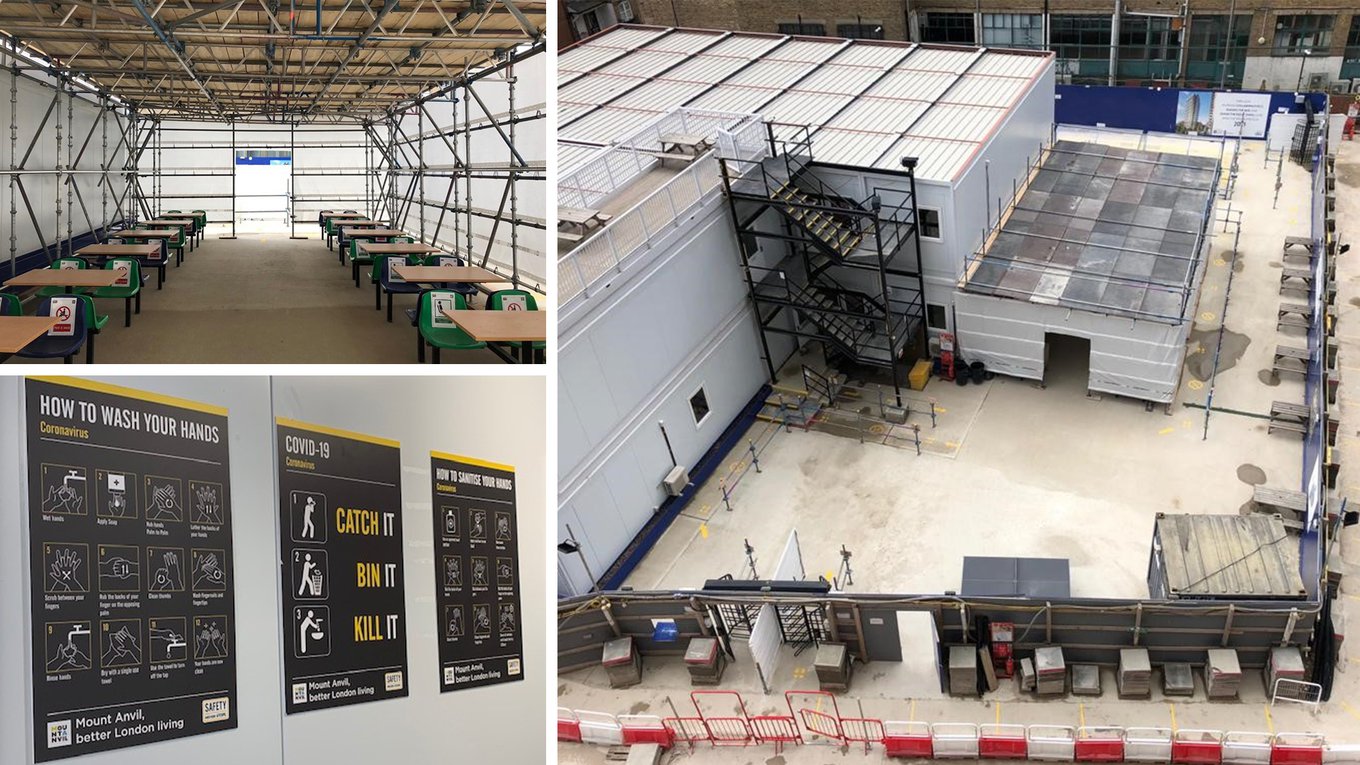 How do you go about that, practically speaking, on a working building site?

We do a lot that other developers don’t, is the short answer. That ranges from offering free porridge for anyone on site before 7:30 (because we want people firing on all cylinders and my mum was right – a decent breakfast really does set you up for the day), to full on-site occupational health checks for our people and contractors.

Mini medicals covering blood pressure, cholesterol, all that sort of stuff save time for everyone. It means contractors aren’t losing hours taking half days off to go and see a doctor. It’s less stressful for people to pop into the site office for 10 minutes than to go and sit in a doctor’s waiting room, so there’s a mental health benefit there too.

That said, with everything that is going on at the moment, we have had to limit what we offer. So, our mini medicals have been put on hold until we feel it is safe to start doing those again and while our breakfast is still on offer, it’s takeaway only. It’s a shame but they’re temporary changes to keep everyone safe.

And you mentioned last time that the physical site has a role to play in wellbeing too?

Lots of the ways we make people comfortable on site – better lighting, heating, increased headroom – are as much about health and wellbeing as they are about safety.

But we go further than that. We received an extra innovation point on our first 46/50 CCS inspection for creating a leafy woodland theme throughout the canteens and common areas on site. We didn’t   do that just because it looks nice – we’d have got a few raised eyebrows it we had. We did it because research shows that time spent in natural surroundings makes people feel happier and more relaxed.

We received another innovation point on our second 46/50 inspection for our wellbeing wall, which includes a phone box people can use to call or Skype their loved ones on their breaks – and because this is for individual use, we’ve been able to keep this open still by cleaning it after each person is finished.

We’ve also opened up our basement car park for all our guys and girls and created more cycle storage as we want as many of our teammates to carry on avoiding public transport as much as possible and to feel comfortable when coming into work. 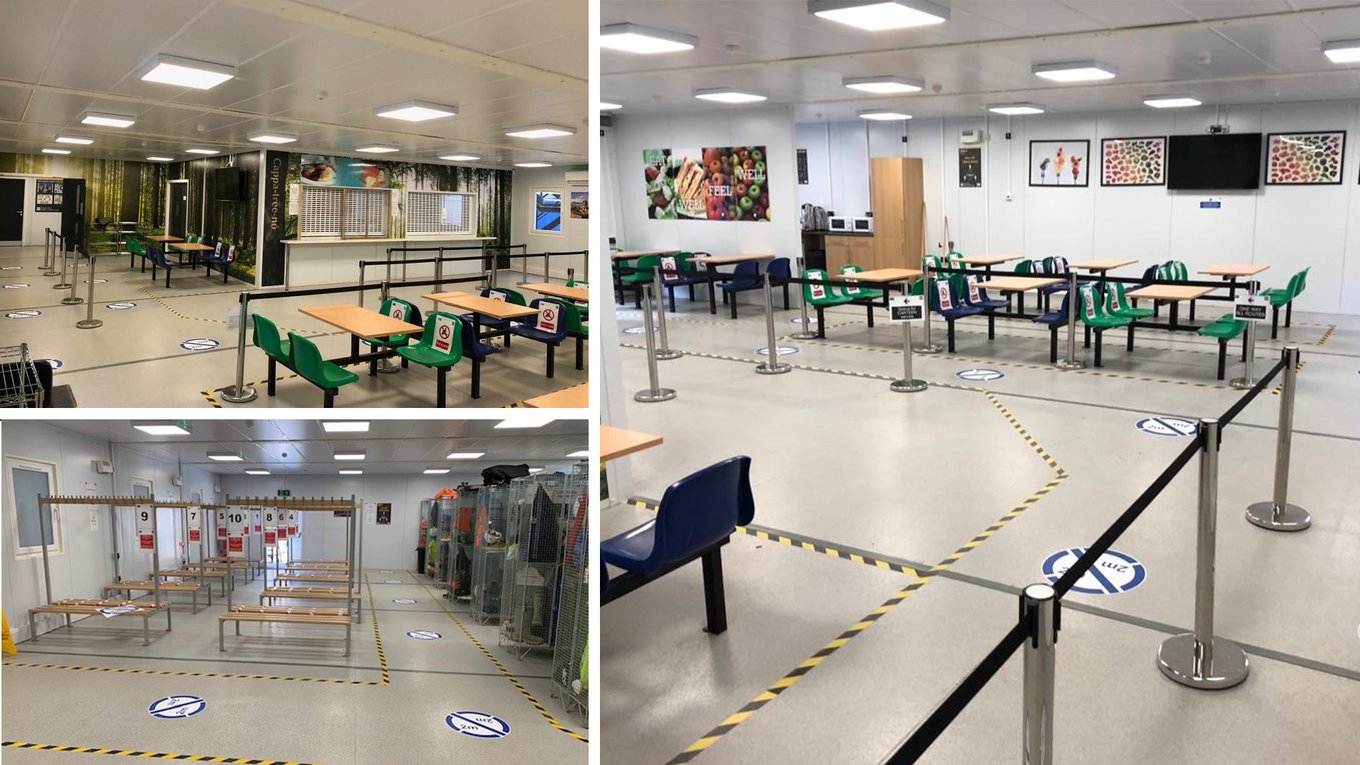 How does facilitating wellbeing like that translate into part of the site culture?

We’re not just telling people how much we respect and value them and their work. By ensuring people are well and happy as well as safe while working, we’re showing them. That’s something we try to do constantly – by improving the site to make working easier and safer, by ensuring their voices are heard, and by keeping them connected to the end product.

That’s part of how we work every day – it’s in our health and wellbeing offer, in outdoor picnic tables for lunchtime in summer, in ping pong tables and a dartboard for the team to use. It’s embedded in the culture and how we work.

But we also make sure that we do something a bit special at key points in the project. For example, last summer we let the site down tools early one afternoon and laid on a big barbeque for the whole team. We bought all of the food and drink – that’s money out of our pockets, but it’s money we’re really happy to spend. We’d do it every week if budget allowed!

So, recognition and reward are important?

Cash rewards, a big team breakfast out, or drinks after work have their place, and we regularly offer rewards like that for a job well done.

But recognition is just as important as reward – maybe more important, actually – because feeling valued and appreciated is fundamental to feeling happy at work.

We’re all quick enough to speak up when something isn’t how we expect, so if someone’s doing a good job we chirp up and tell them about it. If a contractor goes above and beyond, we also make sure we’re talking to their MD too, letting them know how well their people are doing here.

People who are happy, confident and healthy do great work. All of this helps to encourage a culture where people are actively delivering their best – and that obviously shines through in the quality of the end product we’re making here.

Thanks Andy, we’ll be back for another chat soon!

Looking forward to it, thanks!