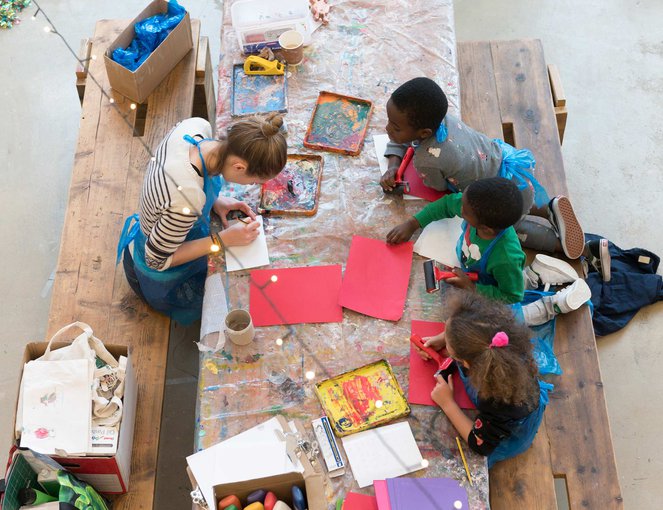 Made in the Royal Docks

East London is the largest cultural quarter in Europe, with 13,000 artists and over 150 galleries based in the area—a figure that is set to grow as the new East Bank quarter establishes and develops. Creativity is already flourishing in the Royal Docks. Raw Rainbow, a community-driven public art installation made from sustainably sourced ribbon, won installation design of the year at the 2020 Dezeen Awards. The installation transforms a footbridge at Royal Albert Wharf into a giant rainbow and was created to bring local residents together during the lockdown.

Behind the regeneration of the Royal Docks is a drive to ensure the existing community takes a leading role—and local artists are being asked to make that message clear. Making Space is a four-part commission of public art by Tower Hamlets-based artist Jessie Brennan. It is designed to reflect on the things that have shaped the Royal Docks, its community as well as the future.

It’s not the first time this has happened in E16. During the 1980s, when plans for the Docklands were being drawn up, a project engaged a cluster of waterfront communities who used art to influence the shape of that era of regeneration.

Much is made of artists establishing communities and turbo-charging their popularity. You only have to look at the changes seen in other east London neighbourhoods such as Shoreditch, Hackney, Dalston and Walthamstow which were once down-at-heel areas but now are now packed with trendy bars, breweries and cafes. Today, there’s a pool of established and start-up creative initiatives based in and around the Royal Docks.

Art and film (15 mins from Royal Victoria station)
The RAW Labs is a Bow Arts creative-arts hub located in the Royal Albert Wharf which champions arts, culture and creativity. It offers a programme of events and workshops, selling exhibitions for local residents to come and buy pieces of work, as well as organising talks, life drawing classes and film screenings.

Perky Blenders (8-minute walk)
A family-run coffee producers, Perky Blenders began life with a single roaster in their back yard but now have a full roastery and production facility which sells seasonal blends and single origin beans. Stock up at their coffee shop Perky Blenders x Goodvibes located at Expressway London.

Dance and live music (10-minute walk)
The Silver Building is workspace and cultural centre. Once the offices of Carlsberg-Tetley, there are set designers, small-scale ateliers, photographers and classically trained artists currently using its affordable workspaces. Take lessons in the professional dance studio, House of Mass, see the artists’ work at the regular exhibitions and get tickets for their live music events.

Royal Docks Fitness (7-minute walk)
Royal Docks Fitness first opened its doors in 2014 as a functional fitness gym focussing on improving the overall health and fitness of its members. The centre has members of all fitness levels and abilities, priding itself on their welcoming environment. Their combination of industry leading coaches and flourishing community have garnered a reputation as one of the best independently owned gyms in the U.K.

Micro-brewery (11-minute walk)
Husk Brewing is a family-owned brewery in the Royal Docks—the first brewery in Silvertown. Established in 2015, it produces a range of six craft beers. Using traditional brewing techniques, they create beers with a modern twist such as a Mandarin & Earl Grey Tea IPA which commemorates the Great Tea Race of 1866 when two clippers, laden with tea, finished neck-and-neck after a 14,000-mile return from China. It's all available to enjoy alongside burgers and cocktails at their newly opened Taproom & Kitchen.

Men’s tailoring (5-minute walk)
Albert Clothing is a menswear tailor hand-making suits, shirts and shoes in the Royal Docks. Established in 2015, the designs are heavily influenced by elegant 1940s British style. For those looking for more contemporary streetwear, Liam Hodges is a luxury online retailer based in the Silver Building. He puts upcycled materials and environmental awareness at the forefront of designs.