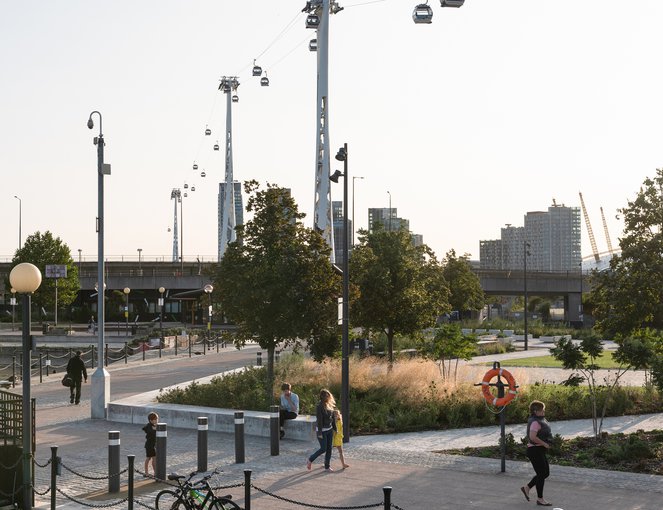 The Royal Docks have been dubbed “London’s second city centre” and are set to become the heartland of the new East End within a decade. Here’s why Royal Eden Docks makes for a promising investment.

Back in the early 1980s, after containerisation led to the closure of London’s dockyards and ships docked in deeper waters at Chatham and Tilbury, the Royal Docks—along with the entire Docklands–were an unpromising wasteland.

Yet within a few years, young City professionals with cash in their pockets were turning their attention to the area and beginning to snap up properties. Their reasons echo what’s going on today at Royal Docks: the London Dockland Development Corporation were busy revitalising the likes of Canary Wharf investing in infrastructure, streetscaping and attracting businesses. Those so-called “yuppies” had spotted an opportunity. It worked: property prices in Canary Wharf today are among the highest east of the City.

Experts analysing the property market following the pandemic highlight two emerging trends, both of which point to the opportunities at Royal Eden Docks. The first is the demand for homes in amenity-rich developments with easy access to outside space: in Knight Frank’s buyer survey 2020, 66% of respondent said a garden or outside space was important and 61% said they were more likely to work from home. The other is a boost in the market fuelled by government incentives such as the stamp duty holiday and historically low interest rates. New homes sales in Newham are already up 36% quarter on quarter.

It was the Olympic Games in 2012 which kick-started Newham’s regeneration. The borough was one of the few areas in the capital with the space to host all the sporting infrastructure as well as the associated commercial and residential development required. Today, the legacy lives on with the new £1.1bn East Bank culture and education district, home to institutions such as the V&A and BBC, which is attracting new buyers and tenants to the area.

The Royal Docks were given a specific shot in the arm in early November with the Mayor Sadiq Khan’s announcing plans to relocate City Hall to The Crystal. The building, which stands next to the Emirates Air Line, is thought to be one of the world’s most sustainable and the move reinforces the drive to reduce levels of pollution in the capital improving the wellbeing of its residents. The Mayor believes it will also “turbo-charge” the regeneration of the Royal Docks in the same way that the opening of City Hall did for Tower Bridge.

The Royal Docks is set to become one of the best-connected places in London within 10 years lying, as it does, at the heart of East London’s infrastructure growth plans. When London City Airport opened in 1988, the only places you could fly to were Plymouth, Paris, Amsterdam and Rotterdam. With the current £500m expansion plans, including quieter planes and a new terminal, flights will travel to Europe, the Middle East as well as the east coast of America.

Investment in the DLR includes the introduction of 43 new trains and significant station upgrades. And the building of the £1bn Silvertown Tunnel under the Thames will connect North Greenwich to the Royal Docks when it opens in 2024.

Finally, the Elizabeth Line (Crossrail) will stop at Custom House (three-minutes’ walk from Royal Eden Docks) when the line opens in the first half of 2022. Journey times to the City will be 10 mins, Bond Street 17 mins and Heathrow 52 mins.

The Royal Docks is London’s only Enterprise Zone offering attractive tax breaks and business incentives. There are three main focus areas: Royal Albert Dock is home to the Asian Business Centre, a new international district; Silvertown Quays, a new mixed-use destination; and Albert Island, set to become the focus for London’s growing infrastructure and logistics industries, including a cutting-edge new shipyard for the Thames.

Over the past five years, average property values in Newham have increased by 28% compared with just 19% across London as a whole and 18% in the neighbouring borough of Tower Hamlets which is home to Canary Wharf.

Affordability is a big driver for growth and prices at Royal Eden Docks are currently 35% below the London average. At £883 per sq ft (£9,598 per sq m) it offers better value than neighbouring areas.

“You can get a two-bedroom flat in the Royal Docks for what you’d pay for a premium studio in Canary Wharf.” Gary Hall Head of Lettings, Knight Frank LLP

Add to this the expectation that the population of Newham will grow by nearly a quarter (24%) by 2029, as it continues to appeal to young professionals, students and graduates. This will inevitably drive up demand and put pressure on prices.

For those interested in the local lettings market, our sister site, Royal Docks West, has seen 60% of lets to go to corporate tenants with projected yields (four years in advance) well in excess of 4% (the average across London is 3.5%). It all points to an exciting opportunity for future growth in this part of London.

Interested in finding out more about life at the Royal Docks? Check it out here.