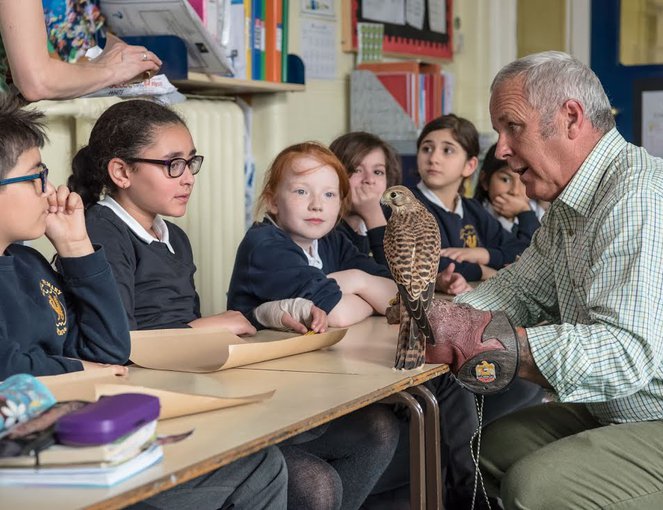 Mount Anvil have joined forces with Natural England and Lambeth Council to support peregrine falcons and raise awareness of the relationship between animals and humans in urban spaces. Read more below.

In addition to delivering 470 outstanding homes, Keybridge will also provide a safe haven for peregrine falcons to nest. This is part of the work we are undertaking with Natural England to help protect the nesting area of these magnificent birds.

We were inspired to support this endangered species* following a peregrine falcon nesting on the top of the BT Exchange Tower at Keybridge last year. The bird nested on top of the tower and eventually gave birth to three healthy chicks.

In addition to creating a better environment for these birds, we wanted to help develop a culture of understanding and care for our natural environment. To this end, we were excited to support an artist as part of the “Exploring Vauxhall” project by Lambeth Council. The initiative is part of Cultivate, a learning programme for children, and consists of three distinct creative projects. The project which Mount Anvil supported explores the relationship between animals and humans and how we coexist in urban spaces. Wyvil Primary school hosted the project and appointed Harriet Smith, an artist in residence at Kentish Town City Farm, to deliver a series of sessions with science-based learning outcomes. The sessions provided information on the peregrine falcon which nested at the top of the BT tower as a case study.

The sessions were a great success and received very positive feedback. In the words of Susanne Buck, Co-Director of Flow Global, who co-organised the project, “It was lovely to hear from the teacher how much the children had enjoyed working on the project and how much they had remembered from the workshops”. One of the year four students said, “I found out that there were falcons next door. I enjoyed it because I never knew about that”.

On completion Keybridge will be the UK’s tallest residential brick tower. The development features enviable amenities, including one acre of landscaped open space, 24-hour concierge service, the Keybridge Club Lounge, a 15 metre swimming pool, gym and spa with sauna and steam room.

Find out more about Keybridge by downloading the brochure, or registering your interest today.

*The peregrine is afforded the highest degree of legal protection under Schedule 1 of the Wildlife and Countryside Act 1981.

Internationally, peregrines are also listed in Appendix 1 of the Convention on International Trade in Endangered Species.