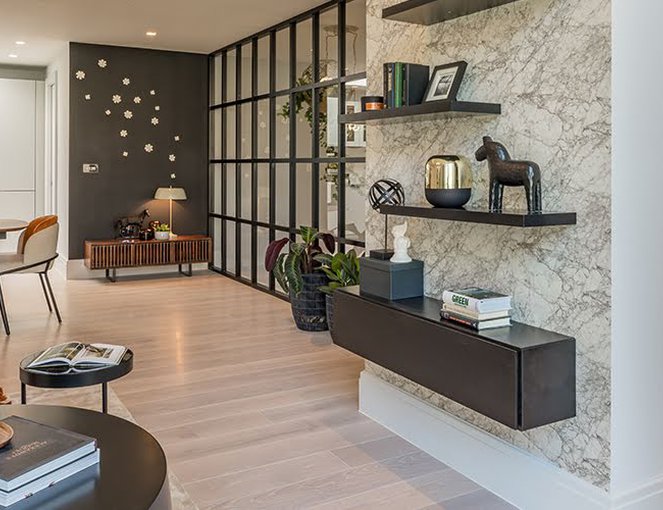 Contemporary by design, the living area is arranged across the ground floor, while the three bedrooms are  located on the subterranean floor below, designed to provide a heightened level of seclusion and privacy. These homes offer a virtually private outlook over Sumray House and the natural wildlife pond on their doorstep.

Reimagining Hampstead Manor’s botanical past and its former incarnation as Westfield College, a women’s education institution established in the 1890s, Sumray Row is set beneath a canopy of ash, lime and laburnum trees. Each home has a soft planted roof, which is home to native flowers and plants, increasing the bio-diversity of the surroundings. Situated to the west of the site, Sumray Row sits against the backdrop of the grand Kidderpore Hall residence.

Externally, refined brickwork and careful craftsmanship is complemented by a weathered bronze framework, and a floor-to-ceiling glass frontage that invites natural light to pour into every corner of each home.

The lower level consists of two double bedrooms and a large family bathroom, decorated with marble-effect tiles and polished chrome fittings to give the room a boutique hotel feel. The master suite can also be found on this floor, complete with a private dressing area and en suite bathroom. There is ample storage in every bedroom, cleverly concealed to hide cumbersome items. Additional storage solutions on this level include a double-breasted cupboard in the hallway as well as a vast under-stair cupboard, ideal for keeping essential household items hidden away from view.

Two of the bedrooms benefit from direct access to the exceptionally large terrace, which acts as an extension to the master and second bedroom. The outdoor space is not overlooked by neighbouring buildings, creating a private and secluded sanctuary for residents to enjoy, a rarity in the capital.

Up the stairs and onto the upper level, residents are welcomed by a black Crittal-effect glazed partition. A feature that harks back to the classic British glasshouse, like that of the historical Kew Gardens, define the contemporary interiors.

A space designed with entertainment in mind, the upper floor hosts an expansive open-plan living, dining and kitchen space, with views across the gardens. A notable statement feature in the kitchen is the glass-fronted overhead kitchen units that provide a stylish storage solution, whilst allowing natural light from the above light well to reflect back into the space. On this floor residents will also find a large utility room, further storage space and a powder room.

The attention to detail and fine craftsmanship further characterise the communal spaces. The light coloured, hard-wearing engineered timber flooring runs throughout. Laid straight for a more modern look, the flooring elongates the spaces and brings them together to create a bright and open atmosphere.

Residents of Sumray Row will have a choice of two material palettes, both of which have been inspired by the mercantile travels to India by John Teil, the wealthy merchant and former resident who commissioned Kidderpore Hall on the grounds in the 1840s.

Jon Hall, Sales Director, Mount Anvil, comments: “Sumray Row is arguably at the more progressive end of the architecture on offer at Hampstead Manor. It’s not every day that you see subterranean homes sitting alongside a Neo-Classical mansion house, but in many ways, they are the perfect stable mates. Sumray Row, with its low-lying architecture, maximises views of Kidderpore Hall, while Kidderpore Hall basks in the spotlight, it also affords Sumray Row additional privacy. The inverted layout, with bedrooms on the lower level, also plays with convention, but to great effect, with the upper level enjoying charming views across the green.”

To mark the launch of Hampstead Manor’s newest phase, a new show home at Sumray Row has been designed by Suna Interiors. The boutique designers have deployed their distinctive style to bring the legacy of Hampstead Manor to life inside these homes.

Leonnie Whitehead, Senior Interior Designer, Suna Interiors, comments: “With such a rare opportunity to develop an interiors concept for a subterranean home so close to central London, we wanted to play on this notion of inviting the outdoors in. We kept the colour palette neutral, layering this with earthy tones and textures and botanical accents. So as not to detract from the glass front and enhance the view that looks out onto the gardens, we wanted to keep the interiors of the communal spaces bright and sophisticated.

“The garden greenhouse was an influence on the space and nods to this can be found throughout. One of the more prominent design features being the Crittall glass wall, gives the interiors a ‘greenhouse style’ feel. Finishing touches include bespoke brass terrarium pendant lights with hanging greenery; and a black feature wall with ceramic wall mounted flowers, which all combine to evoke the site’s botanic legacy.”

In addition to their own private outdoor space, residents can enjoy the communal gardens and on-site amenities including a gym, swimming pool, spa and 24-hour concierge. Located directly next to Willoughby, residents benefit from weather-proof access to the leisure suite as well as the private underground car back. A town car service is also available.

Situated on an historic site just minutes from the heart of Hampstead Village, Hampstead Manor is a remarkable new development in London’s most coveted postcode – NW3. Hampstead Manor’s 156 homes range from studio apartments to five-bedroom homes, of which 98 are new builds and 54 sensitively restored conversions.

Situated in close proximity to Hampstead station, Hampstead Manor enjoys easy access to King’s Cross St Pancras in 11 minutes, and central London beyond. Nearby West Hampstead station facilitates access to Heathrow and Gatwick airports in under an hour.

Mount Anvil has spent nearly 30 years focused on London, striving to become its most respected developer.  A Mount Anvil home is part of a collection that’s in tune with its surroundings. They’re built to last and built for lasting value.  We raise the bar each time, evidenced by the customers and partners that keep coming back to us.  We promise and deliver exceptional homes and places that are known for world-class design, lasting quality and genuine customer care.  We call that Better London Living.

The results are clear:

London is ever-changing and we’re proud of the role we’ve played in creating homes and communities which enhance its world-class status.