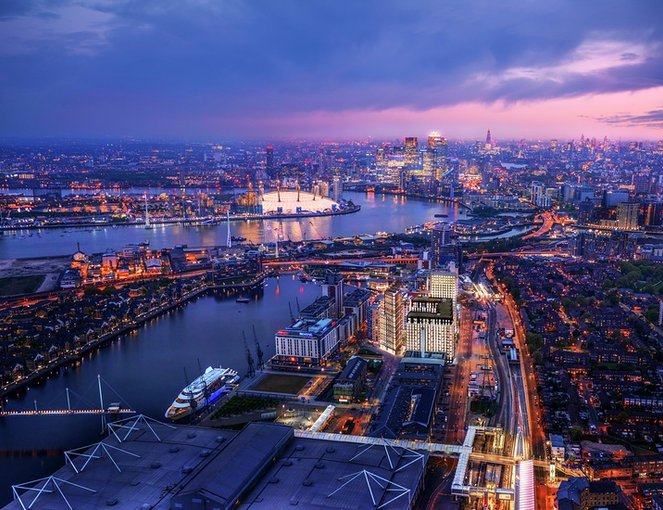 Top 10 reasons to buy in the Royal Docks

The Royal Docks is one of the largest and most exciting transformation stories in London. Big investment, rapid growth and new homes at the water’s edge are attracting a buzzing new population of young tech, finance and cultural professionals, and amazing new amenities are adding to the area’s unique lifestyle offering. There’s never been a more exciting time to buy in the Royal Docks. Find out why below. Read more below.

East London has been known worldwide as London’s buzzing, youthful creative heartland for decades – but since the 2012 Olympics the area has been flourishing, leading London Mayor Sadiq Khan to declare that “the centre of gravity in London is moving east”.

In recent years, east London has seen the fastest population rise of any area in the UK, thanks to significant government investment, the creation of over 110,000 new jobs in the area (generally in tech, science and media) since 2012, and the legacy and infrastructure of the Olympics.

2. The Royal Docks is benefitting from massive inward investment

A £314 million investment package, approved by the Mayor of London, is accelerating the transformation of the Royal Docks, and has helped inspire investor confidence – a projected £8bn of investment will flow into the area over the next 20 years.

Driven by this investment and the creation of new international business powerhouse Royal Albert Dock, the Royal Docks will emerge as London’s newest business district, sitting alongside Canary Wharf and The City.

The population of the Royal Docks is growing fast, with new residents attracted by its waterfront location and lifestyle, value for money and proximity to Canary Wharf.

The GLA predicts a 24% increase in population for the London Borough of Newham (where the Royal Docks is located) by 2029 – more than double London’s predicted population growth of 9%.1 Those new residents will contribute to and benefit from the creation of a projected 60,000 new jobs in the Royal Docks.

Huge numbers of people wanting to live and work in the Royal Docks means booming demand for quality properties – perfect for investors, landlords and owner-occupiers.

4. The Royal Docks is connected

A major upgrade of the Royal Docks’ transport infrastructure is underway, boosted by £600m of TfL investment in the DLR, and spearheaded by the arrival of the Elizabeth line (Crossrail) at Custom House.

The Royal Docks’ international connections are also getting upgraded, thanks to £500m investment in London City Airport. The upgraded airport is just 14 mins from Royal Eden Docks by DLR, and will include a new terminal, new links to North America and the Middle East, and a capacity increase of nearly 2 million passengers a year.

Massive investment and real transformation means big returns for buyers and investors. In the past five years Newham has seen house price growth of 63%, the highest of any borough and double the average across London at 31%. Despite that, prices are still around 25% below the London average – putting buyers in a great position.

With the population flourishing, Nationwide predicting a 9.4% lift in the future value of homes within 500 metres of a tube or train station, and businesses voting with their feet and moving to the area, CBRE have forecast 21% rental value growth and 11% house price growth for the Royal Docks by 2023.

World-class developers and architects are helping to make the Royal Docks one of London’s biggest and most exciting transformation stories.

Royal Eden Docks has been designed by globally renowned architects Skidmore, Owings and Merrill (SOM), the studio behind 35 Hudson Yards in New York, the China World Trade Centre in Beijing, and Dubai’s Burj Khalifa, the tallest building in the world.

7. The Royal Docks lifestyle is unique

Buzzing waterside restaurants, cafes and bars, and some of London’s best entertainment venues and sports facilities are on the Royal Docks’ doorstep.

8. Life’s better by the water

Life at the water’s edge is synonymous with health and wellbeing. More than £100m investment approved by the Mayor of London is being poured into the Royal Docks streets, parks, public spaces and docks’ edge, creating new walking and cycling routes around the docks – but it’s the water itself that takes centre stage here.

With 250 acres of water and nearly 20km of waterfront offering unreal views from new apartments, wakeboarding and paddleboarding steps from home, dining aboard a superyacht or joining the London Royal Docks Open Water Swimming Club, the Royal Docks is the perfect place to discover a better (and wetter) life in east London.

There are 48 schools rated as ‘Outstanding’ by Ofsted within five kilometres of Royal Eden Docks, and London’s best universities are within easy reach too. University College London (UCL), ranked #1 in London and #8 in the world, King’s College London (KCL) and the London School of Economics & Political Science (LSE) are all within 30 mins of the Royal Docks.3

The area offers a range of green spaces for residents to unwind and recharge in, from the landscaped gardens and play areas of the 22-acre Thames Barrier Park, to the millennium tree trail and open space of Beckton District Park on the doorstep to the north.

Closer to home, Royal Eden Docks is a brilliantly green environment, designed around its residents’ wellbeing and boasting 5,000sq m of green space – the equivalent of 20 tennis courts. Every home also has a private balcony or terrace helping to connect residents even more closely the outdoors.