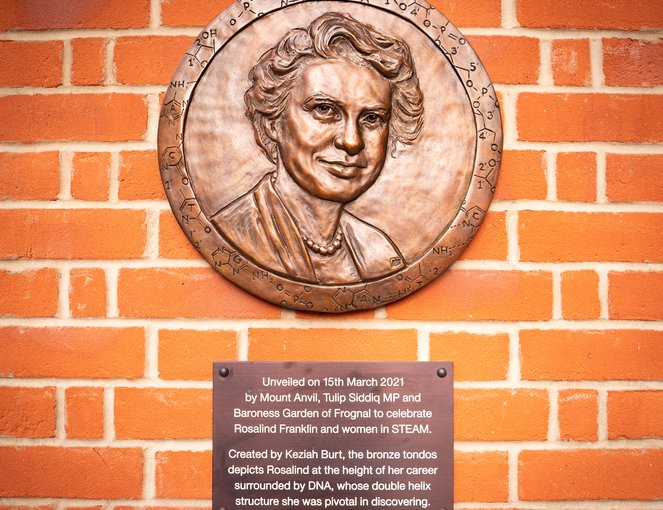 Celebrating diversity, it's in our DNA

To celebrate International Women’s Month this year, we commissioned a tondo portrait of Rosalind Franklin by up-and-coming artist, Keziah Burt who has recently been selected to exhibit at the Royal Society of British Artists Annual Exhibition. Read more below.

The sculpture depicts Rosalind framed by formations of DNA – whose structure she was instrumental in discovering - and will soon become a permanent feature outside of the former Westfield College site at Hampstead Manor; which was founded by women for the higher education of Women. The site later formed part of the King’s College London campus, where Rosalind was a research associate at the time she made her discovery.

Lisa Ravenscroft, Chief Marketing Officer at Mount Anvil comments, “Rosalind Franklin paved the way for women in science, but like many women at the time she didn’t get the recognition she deserved. So, I am thrilled to be unveiling the tondo which will be positioned proudly on the building named after her at Hampstead Manor in her honour during International Women’s Month.

“With an urgent need to respond to climate change and more recently with the pandemic, it has never been more important to inspire and promote women into careers within science, technology and engineering – and by introducing a face of science that is female, we hope that it will inspire women to follow in her footsteps.”

Keziah Burt, the artist, adds: “With an ongoing debate around the imbalance between male, female and non-binary statues, it is truly an honour to create a piece of art depicting such an incredible woman and I hope it inspires others to walk in her footsteps. With the pandemic nearly over, it has never been more important to have women at the helm of science and technology.”

To unveil the piece of art, we held an online event called “How Rosalind paved the way for women in science, and why we need more women in STEAM”, with Tulip Siddiq MP (and Shadow Education Minister), Baroness Garden of Frognal (a campaigner for women in STEAM), Dr Vian Sharif (Head of Sustainability at FNZ) and Dr Nicky Dee (Cambridge Lecturer and Scientist). You can watch the unveiling and full panel discussion below. For those wanting to see the tondo first-hand, it is also now available for all to do so at Hampstead Manor.